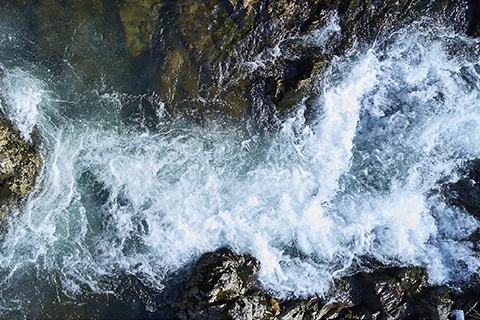 ”The soft water brewing method“, developed by Senzaburo Miura (1847-1908), makes Hiroshima sake distinctive. Finding that the sake’s taste depends on the nature of water used for sake, he created the unique method which maximizes the usage of Hiroshima’s soft water.

Water: a must for making sake

Water plays an important role since Japanese sake consists of 85% water. The water for making sake is divided into two; for brewing and for bottling.

Mashing water helps koji dissolve the enzymes and other elements. Then, jo-mai (steamed rice) breaks down into minerals and vitamins from the action of starch and protein. Eventually, the increase of kobo, as well as fermentation gets on track.

Other than for mashing, water is used for vats, tanks, bottles, tools, boilers, and for cleaning the facilities. 20 to 30 tons of water is necessary to make sake from a ton of rice. The suitable sake brewing water is a necessity to be great brewing regions. No wonder that the breweries are located in the areas of abundant water resources.

”The hardness of water “is an indicator of the water quality. “Hard water“ has high quantities of calcium and magnesium in contrast with “soft water “. Generally water is hard in limestone districts, and it’s soft in granite, gneiss, and basalt districts.

The water in Japan is mostly softer than the one in Europe. The volcanic ash soils, rapid current of short rivers in Japan are the factors of low calcium component in water. Therefore, the subterranean water has low hardness.

On the other hands, it takes longer before the subterranean and river water in Europe flow into the limestone rich strata. The minerals such as calcium and magnesium easily dissolve in water, and thus make the water hard.

Water hardness is often measured by American or German degrees. In the brewery industry, German degrees (°dH) have been used by tradition.

The quality of native water affects the characteristics of sake brewed in the area. The active components include potassium, phosphoric acid, magnesium, and the like. “Yowai-mizu (weak water)” has less of those components while “tsuyoi-mizu (strong water)” has more of them.

In contrast, yowai-mizu delays the growth of koji, and prevents the temperature from rising. The dissolution of jo-mai as well as the increase of shubo (starter culture) and kobo (yeast) get slow, weakening the fermentation.

Miyamizu, a representative of tsuyoi-mizu, has around 6 degrees hard. It accelerates moromi’s fermentation with its grown kobo and high potassium and phosphorus contents. Thus, fuzo (spoilage of fermentation mash) doesn’t likely to occur, and sake can be brewed at ease.

Japanese sake made with tsuyoi-mizu is characterized with its firm and revitalizing tastes. Nada’s sake tastes dry, and has some masculine impression; hence it’s called “Otoko-zake (masculine sake).”

In contrast, most of sake breweries’ well water is soft water, so-called “yowai-mizu”. Since Edo period, Mihara, Takehara and Saijo have been sake brewery districts with their slightly tsuyoi-mizu, or moderately hard “soft water” which facilitates the fermentation, making sake brewing easy. Most regions in Hiroshima have soft water less than 3 degrees hard.

When Senzaburo started his brewery business, fuzo and hiochi (bacterial contamination) occurred consecutively. He investigated the causes, and tried every possible means; building new facilities, working as a kurabito (sake brewery worker, not the owner) at breweries in Nada for learning their production process, and hiring a new toji (Master Brewer) who obeyed his directions. After a while, he noticed the difference between Nada’s water quality and Hiroshima’s. Finally, he found the cause of failure; he had applied the same method used in Nada breweries to his brewing process using soft water.

Hard water is suitable for sake brewing because its high mineral contents can accelerate the fermentation. It makes sharp dry sake. But hard water, including medium hard water, makes the fermentation finish quickly, thus doesn’t bring out the refreshing tanrei tastes and aromas in the final sake.

In comparison, slow fermentation by soft water can be turned into a good long-term one. While young kobo is used with hard water since the yeast are naturally active in hard water, the stage before fermentation requires an elaborate preparation in the soft water brewing method.

The first thing to do in the method is to make koji fully matured so that koji can penetrate deep enough inside the rice. This enhances saccharification of rice and facilitates the fermentation at the next stage. Well matured koji makes sake aromatic and full-bodied.

Sake, made with soft water in such a way, tastes gentle and delicate. Thus, it’s called “onna-zake (feminine sake)” in contrast with Nada’s otoko-zake. That’s how round smooth Hiroshima sake was born. The improved technology made it possible to make both types regardless of the difference in water qualities.

Senzaburo repeated experiments to find the proper sake brewing method using soft water. Then, he shifted from the intuitive approach to the scientific one based on actual measurements. In 1893, he started using kandankei (a kind of thermometer) for controlling the temperatures of koji, shubo, and moromi. He renovated koji-muro (koji-making room) for better ventilation the next year. Then, he established the soft water brewing method by around 1897. It took more than 20 years before he could successfully produce high quality sake using soft water without getting it rotten.

Hiroshima sake that has earned the highest reputation in the nation

Senzaburo’s achievements are more than the development of the soft water brewing method. He disclosed the method which he had achieved through his hard work. In 1898, he published a book named “Kaijoh-ho Jissenroku (The Actual Record of the improved brewing method)”, and he gave away the books not only to the neighborhood of Mitsu, but also to sake brewery members in Hiroshima. As a result, the method prevailed all over Hiroshima by 1906, thus it became possible to produce the upgraded sake with less fuzo.

”Ryusei” of Fujii Shuzo Brewery in Takehara and “Mitaniharu” of Hayashi Shuzo Brewery in Kurahashi was awarded the first and second prize for excellence respectively in the nation’s first seishu (sake) competition hosted by Sake Brewery Association. Hiroshima sake brands won top two awards edging over Nada’s and Fushimi’s, and made themselves renowned nationwide. Senzaburo passed away at 61 years’ old the next year.

Later, the tojis of Mitsu, who had acquired the skills of Senzaburo’s method, worked brilliantly not only nationwide but also worldwide. As Taisho era started in 1912, they were invited as the experts of the epoch-making soft water brewing method to all over the nation, such as Fushimi, the regions of Shikoku, Kyushu and Kanto, and the prefectures of Shizuoka and Nagano. Furthermore, they even went overseas like Sakhalin and Hawaii.

In 1921, the bronze statue of Senzaburo was constructed in his family temple in honor of his achievements. Note; It was reconstructed in Sakakiyama shrine located in Akitsu-cho Mitsu, Higashihiroshima city in 1990.

Senzaburo left his last words behind as follows;

A hundred of attempts, a thousand of improvements ── “Hyakushi Senkai”

His words explain how passionate about sake he was.