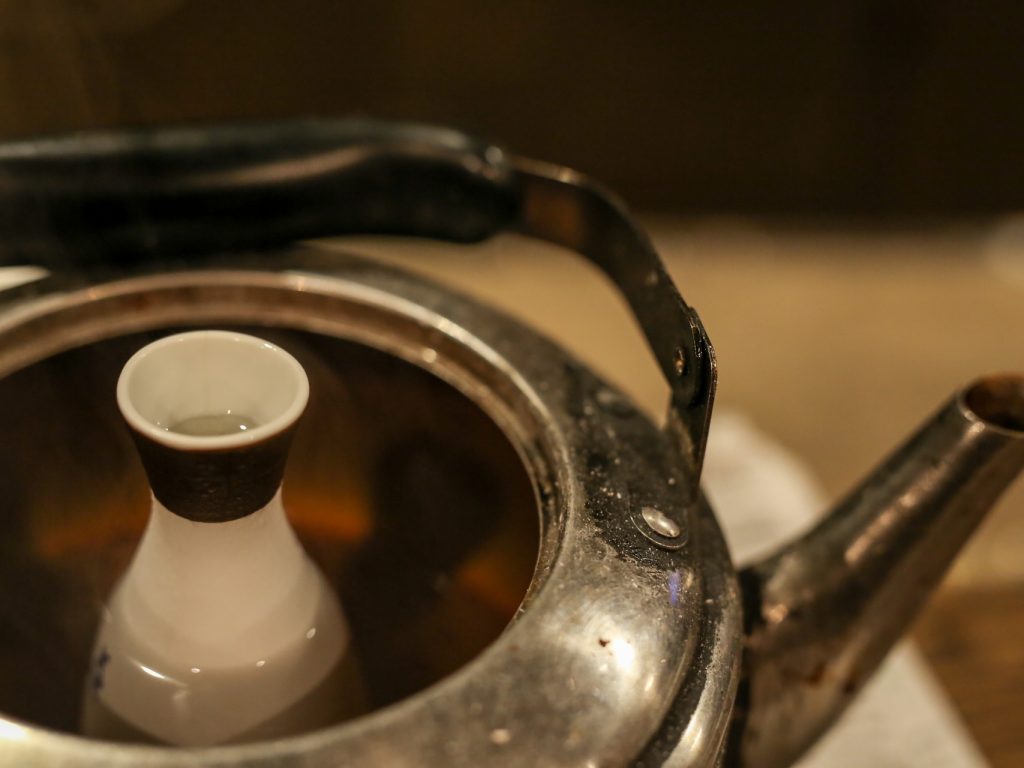 How to drink Japanese sake

Japanese sake is enjoyable with a wide range of tempertures, either cold or warm.

It’s recorded that the nobles had a habit of drinking Kan-Zake in Heian
period. Its origin dates back to more than one thousand years. It became common
among the general public in Edo period. It caused the innovation of sake wares,
such as “Kan-nabe”-a pot that can be put on fire directly- and “Kan-dokuri”
–a sake bottle that can be warmed in hot water by 1 or 2 go(1 go is about 180ml),
The culture involved with sake began to flourish.

Warmed sake,”Kan”enhances sweetness and umami of rice itself, It
softens the flavor more than sake at room temperature does. It comes from
“lactic acid”and“succinic acid”. You can say Kan is one of the ways to enjoy
five palates –sweetness, sourness, dryness, bitterness and astringency.

Names and temperatures of “Kan“

Alcohol is absorbed mostly when its temperature is similar to body temperature.
That’s why Kan makes you feel drunk faster. Cold sake takes time before you feel
drunk. But the characteritics of Kan prevent you from drinking too much. (There
is a difference between individuals)

How to make Kan without failure.

The tip : Immerse Tokkuri in boiling water for a short time.  Put the tokkuri containing sake in hot water, The tokkuri gradually heats up and the heat is transmitted to sake. This is the way to maintain the temperature of sake without losing its aromas.

First, pour sake almost fully in the tokkuri. Then, cover the spout with a plastic wrap to prevent the aromas from dissipating.

Next, put the tokkuri in the pan full of water. Then, adjust the amout of water to half-full.

Remove the tokkuri once, and then heat the water, Turn off the heat on the boil.

Put the tokkuri in the pan. It’s essencial to warm it in the boiled water for a few minutes. If you put it in 40 degree water for making Nuru-Kan, it takes more than 10 minutes and makes alcohol evaporate.Pull out the tokkuri of hot water when sake rises up to the spout.

It will become a fine Kan when you feel slighty hot upon touching the bottom of the tokkuri. Note; The proper timing depends on the material and thickness of the tokkuri.

To find your favorite Kan, it’s better to warm the same kind of sake by
5 degrees(Celsius) in the range of 30-55 degrees. And taste it each time. Try it
at a variety of temperatures, and enjoy hunting for your own favorite temperature of sake.

Sake in the tokkuri gradually gets cool even if Kan is put in the most appropriate temperature of water. It gets cool faster when poured into the cup (or guinomi), so it’s important to drink rather soon after sake is poured. In the cold season, it’s suggested to warm the cup before you pour Kan-sake.

The thermometer is useful for making Kan.

Shukankei”is an alcohol thermometer for checking the sake temperature by
sticking into the tokkuri or chirori before making Kan. It can measure in the
range of 36 to 64 degrees with three guidances ; “Atsu-Kan”, ”Nomigoro”and
“Nurui.”
“Sake themometer” can measure in the range of 0 to 70 degrees using the upper
scale. Its lower scale gives you the sign for “Atsu-Kan”, Ryou-Kan”,
“Nuru-Kan”, ”Hiya” and “Reishu” each. It can be used not only for sake but
also for wine. There are also digital thermometers telling the temperature
simultaneosly.
Please refer;https://www.monotaro.com/k/store/%8E%F0%20%89%B7%93x%20%8Cv/

Warimizu-Kan” is a kind of Kan suggested for drinkers who want to slow down out of tiring for drinking too much, and for not-so-strong drinkers. A little water is added before making Kan. Add water to sake in the ratio of one to five and warm it at your favorite temperature. It tastes mellower and refreshing.

Styles and pairings of Japanese Sake

The graph above is just one measurement. You might find your own combination of favorite sake type and temperature.